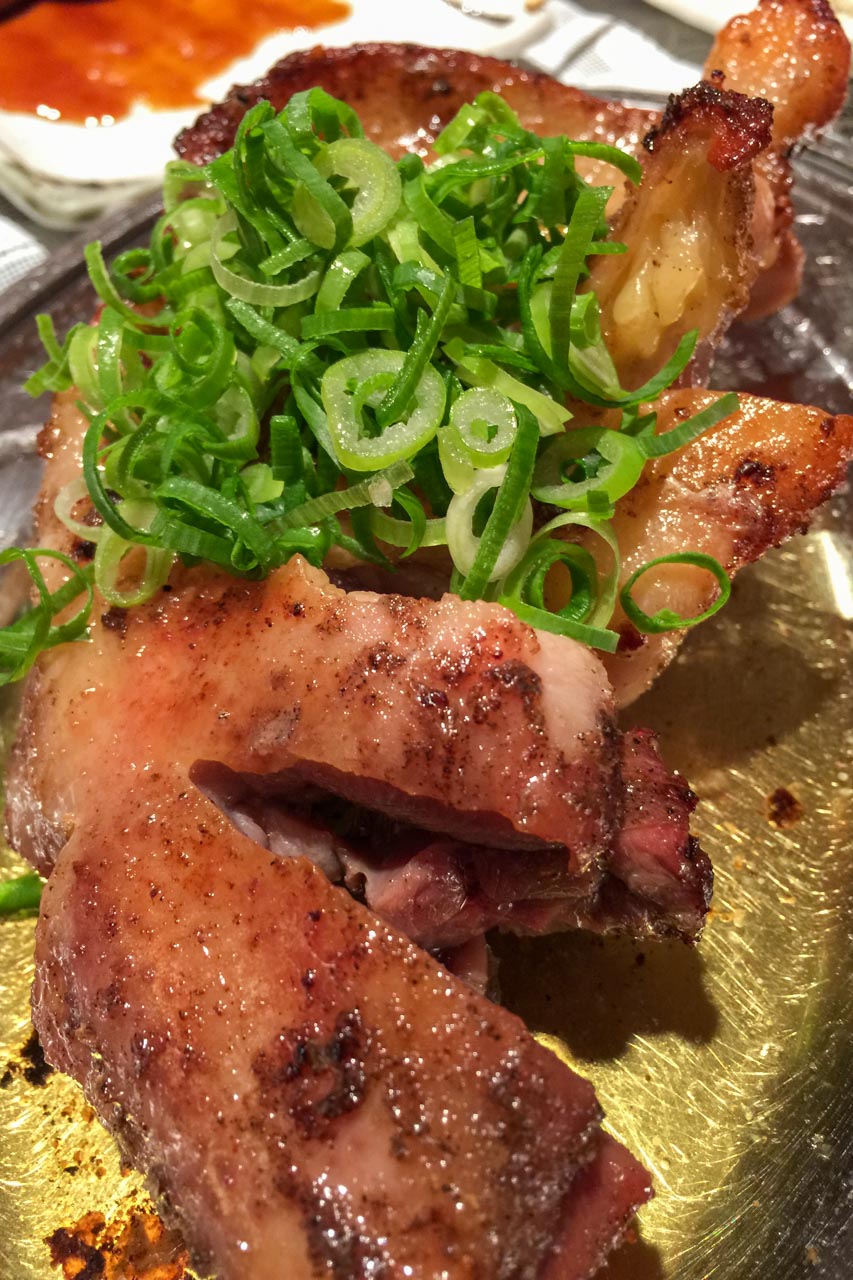 No Marugame Udon in Marugame City

There is no “Marugame Udon” in Marugame City. According to a local acquaintance, the udon shop used to be open, but now it’s closed. I asked him why Marugame Udon closed.
“Because it’s expensive.”
We can eat delicious udon at a reasonable price, if we go to Marugame Udon? He continued.
“The taste of Marugame Udon has no individuality. The taste is good but it is expensive.”
According to the Shikoku Shimbun, the average price is 165 yen, udon shops in Kagawa prefecture. Marugame Udon is not self-service. Well, they can’t compete with local udon shops.

This time, I decided to eat “Honetsuki-Dori” at “Marugame-Dori”, which was recommended by a local acquaintance.

Please watch this video (English subtitles). “Honetsuki-Dori (Bone with chicken)” is chicken boned meat that is carefully grilled in an oven and seasoned with garlic spices.

First, I ordered chicken skin, vinegar jellyfish, and seasonal pickles. A small appetizer was boiled green soybeans. Seasonal pickles are Chinese cabbage. The vinegar jellyfish was good taste. The chicken skin has not only skin but also meat and cartilage. Baking doneness is also good. I don’t know that it’s the style of this restaurant or the style of this area, but I was satisfying to eat the chicken skin. It doesn’t have to be large for my age.

I ate a boned bird for the first time in Okinawa. About five years ago, when I was drinking at Okinawa, a friend of Takamatsu bought a Honetsukidori. “On my way to this bar, I found a shop with Honetsukidori! It’s Kagawa’s soul food!” he explained with excitement. I’m drunk so I don’t remember the taste.

The staff brought hot half chicken meat. He also brought cooking scissors. I press the bone and separate the meat. Next, cut the meat into small pieces. The acquaintances were used to it, so it seemed easy, but when I tried it myself, it was surprisingly difficult. A young clerk girl advised me.

“Gripping bones with a paper napkin will help you cut meat easily.”

I throw chicken with a scent of garlic into my mouth. It’s hard, but it doesn’t mean that I can’t bite it. When I bite the meat more, the taste spreads in my mouth. Delicious. It is fun for me that the texture of meat changes depending on the part. Highball goes well. I wash away the fat in my mouth with carbonic acid and throw the next meat into my mouth.

“This is delicious, but tomorrow we’ll be in trouble.”

I saw a poster with a boned bird on the toilet door. It seemed to be the official poster for Marugame City. A couple of cute women going to eat Honetsukidori in the lead.

Does Marugame’s woman care about plenty of garlic? By the way, even in Kochi in the neighboring prefecture. There are much sliced garlic on the skipjack sashimi at Kochi. Garlic has been an energizer since ancient times. Is this a meaningful poster? Are women counting on other effects than the smell of garlic? Is it a so-called “carnivorous girl”? My delusions were endless. 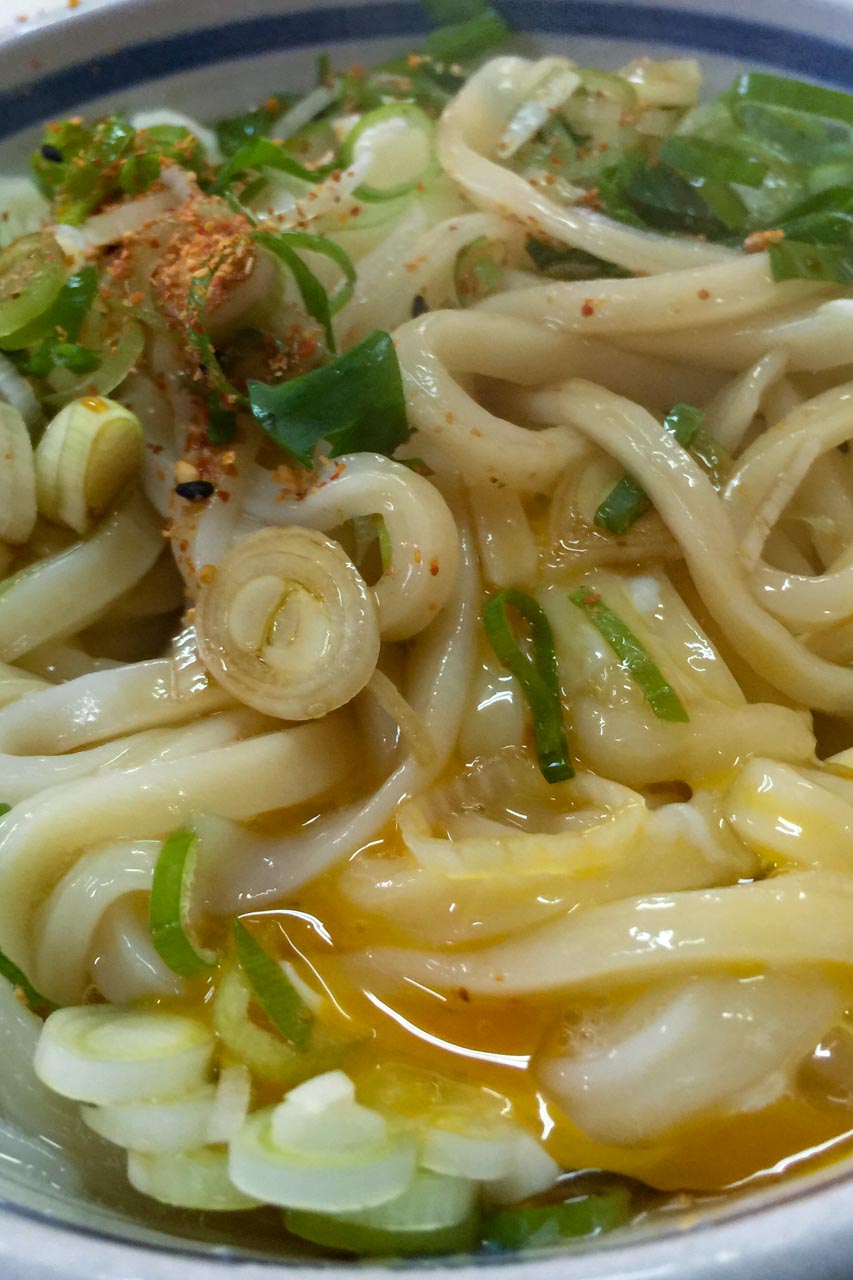 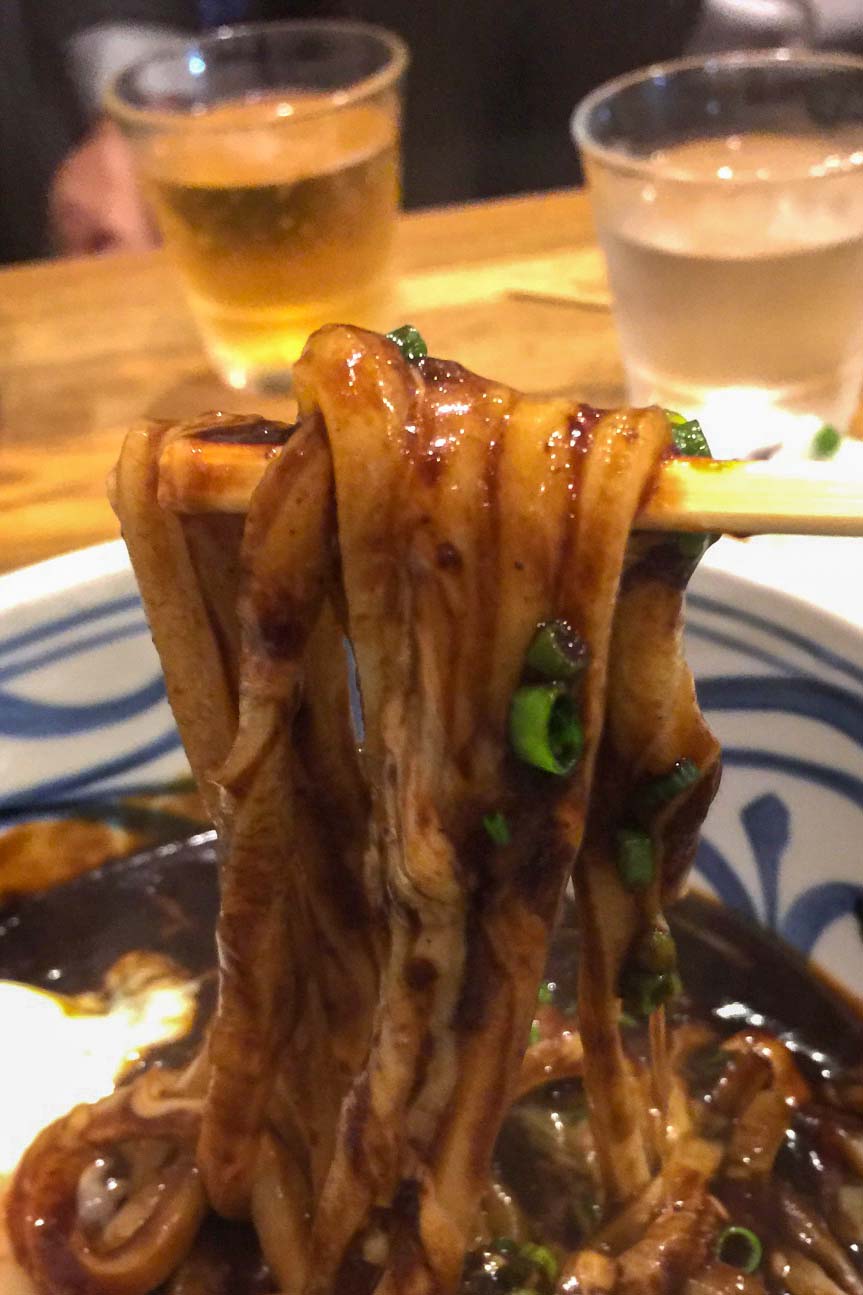