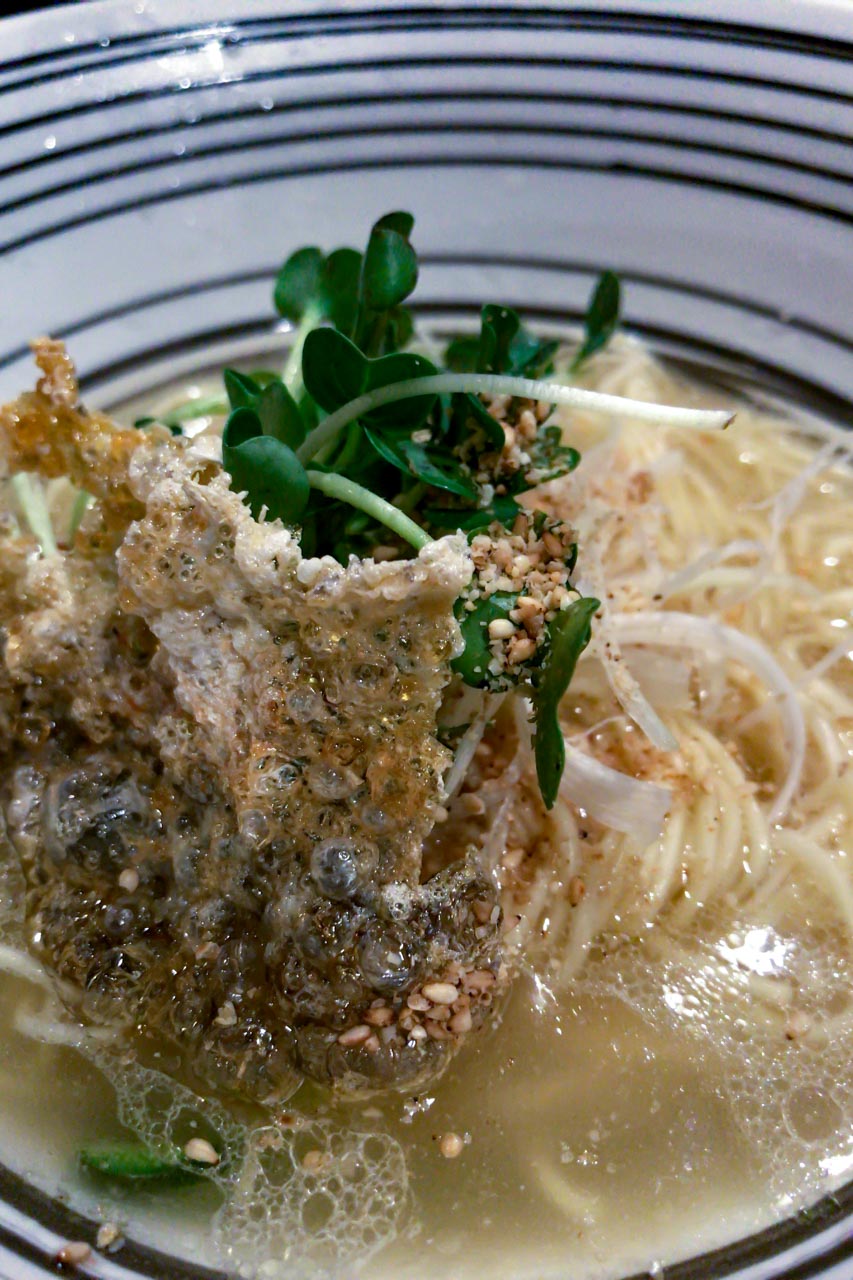 I visited Tokushima after a long time. This trip, I wanted to stay in Tokushima slowly, but I had a hurry because my plan before and after the itinerary. I flew from Okinawa to Takamatsu and rented a car to Tokushima. The next day, the flight to Okinawa will start in the morning, so if you drink deep alcohol, you’ll be driving due to lack of sleep and a hangover. It’s dangerous so I’ll return to the hotel before midnight. But can I do that?

It’s no use to swear to myself, “I’ll stop drinking with three glasses today!” I would go to about three places if I drink. Since it is impossible to set an analog limit on the amount of alcohol, I have no choice but to digitally decide whether or not to drink. But I have to drink today.

Actually, I have a secret purpose for this trip to Tokushima. That is eating sea bream ramen. Moreover, this ramen shop opens at midnight. Can I eat ramen after drinking until such late? Over the last two years I lost so much ability to drink. I was not confident. But I have no choice but to do it.

Tokushima ramen is famous for soy sauce-based thick pork bones. The feature is that raw eggs are dropped during eating. There are many famous stores. According to a local acquaintance, Tokushima ramen and Wakayama ramen are similar. Certainly, these two locations are on the opposite shore, and ferries also operate. I have used the ferry several times.

There are four prefectures on Shikoku Island in Japan: Kagawa, Tokushima, Ehime and Kochi. These four prefectures have different regional characteristics. Tokushima is like Osaka. Many people are ridiculous. It is an area where the Tokushima prefecture government makes a challenging video called “VS Tokyo”. This video was featured in a TV wide show and became a hot topic throughout Japan. According to people from Tokushima Prefecture,

“Kagawa pretends that Takamatsu is a political city, but the source of the water is Tokushima. If Tokushima becomes concerned, Takamatsu will dry immediately.”

“Kochi people are terrible. They say that the water quality of the Niyodo River that flows through Kochi City is the best in Japan. But it was only once in five years in Japan. In other years, it is Yoshino River that flows in Tokushima for four years. .What are you saying.”

I guess each citizen of the prefecture will get angry, if they hear the opinions. I asked about Ehime Prefecture.

“It’s good over there. Ehime is good. We don’t have to quarrel because it’s not our neighboring prefecture.”

The neighbors don’t get along well. Oh, there’s been a few times like this before…

This is a ramen shop that was brought to the locals when I came to Tokushima two years ago. A lot of people usually lined up in front of the shop, but it happened that there were no people lined up that day. The time is about 2:00 am. We drunk a lot at that time, but I couldn’t forget the refreshing and elegant taste of ramen. The owner chef says he came up with ramen by seeing the large amount of sea bream bones discarded at a Japanese restaurant. I heard that this ramen shop opens only midnight because the owner works Japanese restaurant until night.

The ramen shop is in the downtown area. We left the second bar at 23:30. When we left the bar and walked for two minutes, we arrived at a ramen shop. Even before the opening, several people were already lined up. It takes about 20 minutes to open. 12 people came here, but everyone except me went to the bar again. They don’t want to wait until the shop opened. They would come here again at midnight to eat ramen.

A few minutes later, a young, energetic waitress brought in handwritten numbered tickets and a menu. The number “3” was written on the numbered ticket. I looked at the menu. I was curious about the new ramen. However, I decided to order the sea bream salt ramen (medium size) as originally planned.

Whether I didn’t notice it the last time I ate it, or I forgot it, the menu says that I should add rice to the rest of the soup and eat it. I have to try this. When I said the order, the waitress went back to the shop. When I looked back, the line was long. I would have had to wait an hour if I hadn’t lined up earlier.

It’s midnight. It’s opening time. A waitress came out of the ramen shop and guided the guests into the shop. The entrance of the shop is narrow but the interior is wide…No, the counter is very long. There are 10 or more seats. Furthermore, there seems to be a private room behind the shop. I was taken to the back seat of the counter. Guests sit at the counter one after another. It quickly became full. Please serve the ramen as soon as possible.

I noticed that my iPhone battery is very low. I can’t help thinking of the iPhone more than I’m hungry. Oh, good. Ramen came out immediately. This is it! Thin straight noodles in clear soup. The toppings are sprouts, deep fried sea bream skin, and sesame.

I first sip a bite of soup. The intense Thai scent passes through my nostrils and spreads in my mouth. The light and elegant saltiness is irresistible. Then I slurped the noodles. It’s neither hard nor soft, and the soup is entwined with the noodles that have just the right texture. It’s delicious. Eating sprout will make my mouth refreshed. The crispy sea bream skin deep fry texture is fun.

This ramen seems to be small in quantity, but just enough to eat after drinking. The reason why the mega size and giga size are available is probably because they are not enough for young people and big eaters.

Usually my meal is over now. But today I am different. I was careful not to drink too much soup. There should be no problem, because there is so much soup left. Let’s do it. I’ll throw the rice in a bowl.

I looked at the menu again. Additional rice, It’s normal. Mentai (spycy cod roe) and rice, here is Shikoku. Mentaiko is a specialty of Kyushu. Cheese and rice, I don’t feel like eating risotto. Super additional rice (raw egg), raw egg with super. In other words, “Ultra additional rice with a fresh egg.”

By the way, an acquaintance in Tokushima runs a poultry farm. I don’t know if it’s true, but he was proud to say that one of the former Japanese national football teams was a favorite egg on TV. It seems that the eggs in this shop were also produced by his company. OK, Let’s just see. Let’s taste the performance of the white fresh raw egg.

I put fifteen grains of rice, raw eggs and salt kelp into the soup without hesitation.

Mix all at once. The rice sank in the liquid and disappeared. Did I leave too much soup? I wanted to drink more soup. It’s not easy to admit…to the folly of my youth…

I salvage fifteen grains of rice from the bottom of a bowl with a spoon. Let’s eat! I ate rice that smoked soup. Oh! The harmony of sea bream and egg is wonderful. Salt kelp adds pungent saltiness to the umami and sweetness. This is delicious, really delicious! The amount is just right. Eat rice as if pouring it into my throat. The soup was completely absorbed by the rice. I could see the bottom of the bowl clearly. Nothing particularly drawn. I ate everything This is 900 yen, I feel reasonable.

I left the here. The procession stretched further than before. I lined up before the shop opened. It was right. I walked to the hotel immersed in the fulfillment of accomplishing both of today’s missions. 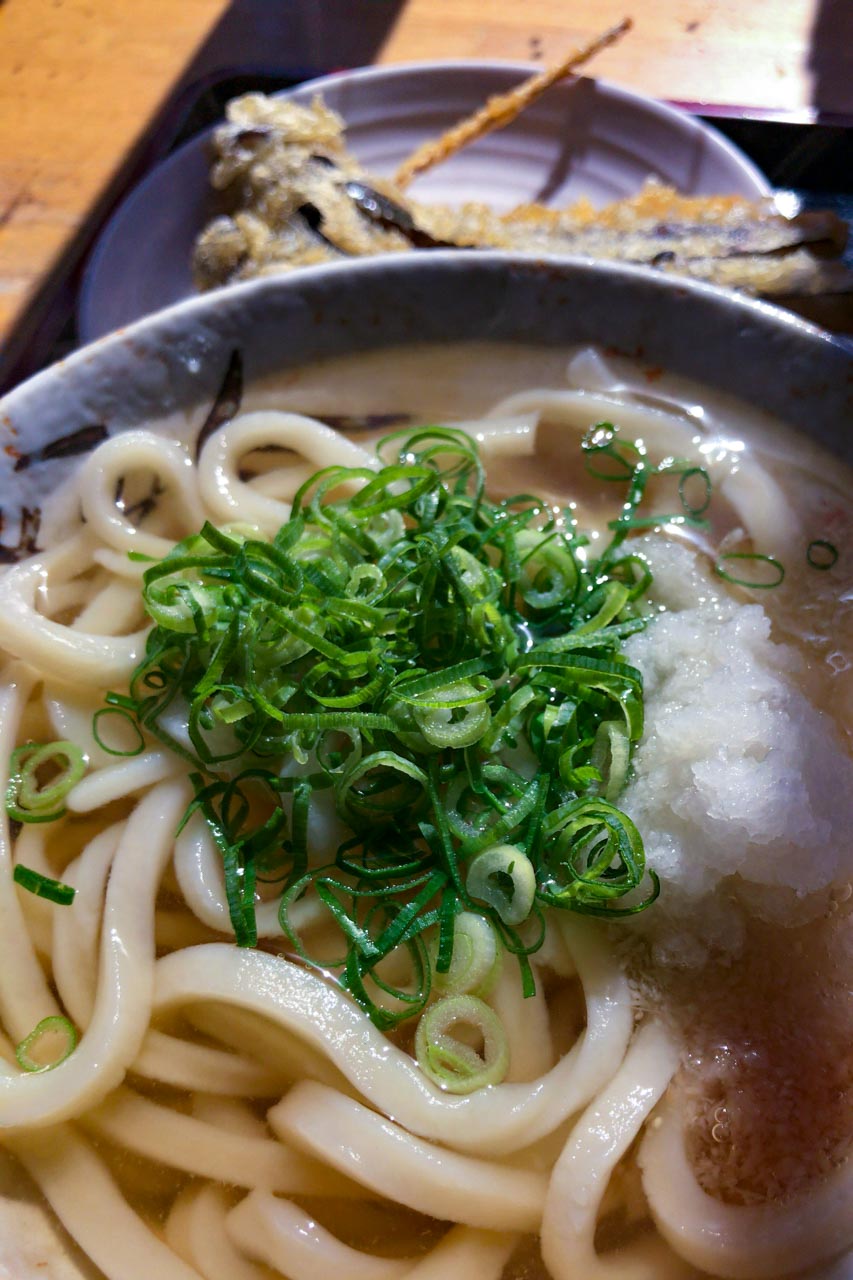