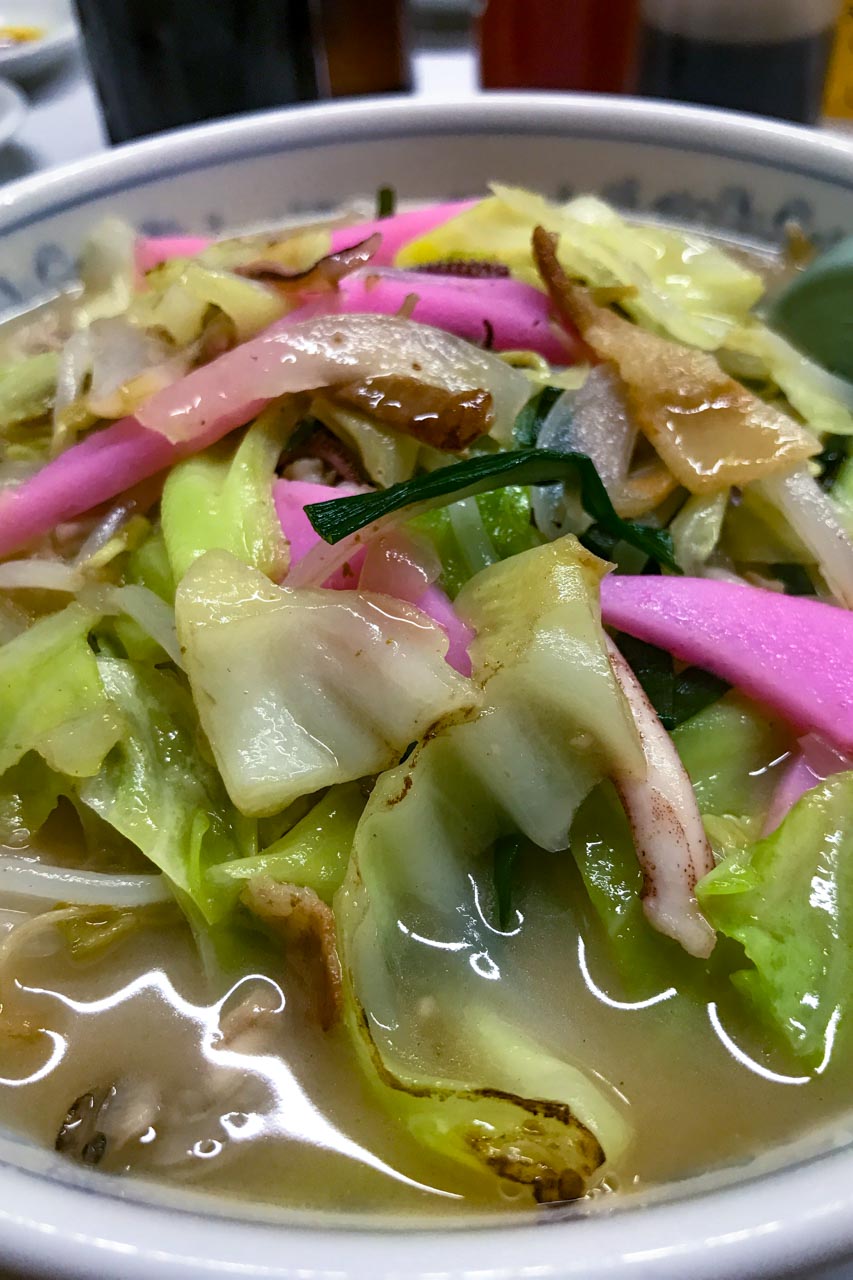 I visited Nagasaki for work. My plan included only a meeting and a party at night. I came from Okinawa for the first time in two years, but I went back to Okinawa with a morning flight the next day. Last time I visited Nagasaki with my wife. We didn’t notice my wife’s pregnancy and enjoyed drinking and eating.

I wanted to eat the same meals as last time, because I have a conservative idea for eating. I don’t expect much dinner parties. Even if it’s a delicious restaurant, I can’t taste and eat slowly because the conversation with the participants is the main focus. I’m not fun because it’s definitely an all-you-can-drink course meal. The venue was again a stylish restaurant with an atmosphere, but it ended as expected. However, it was delicious the fresh sea bream which caught at the Ariake Sea by one of the participants .

The last time I ate with my wife was Champon and Sara Udon in Chinatown, bite gyoza, liver cutlets, Tianjin baozi (steamed pork bun) and mixed rice. We were surprised that the fried chicken we bought at “Maze-meshi” was delicious. “Maze-meshi (mixed rice)” wasn’t very good, even though it was the store name.

Masaharu Fukuyama’s favorite food is stamina ramen in Shianbashi, but honestly, I don’t think it’s very delicious. I remember that the garlic was so strong that it looked like Vietcong ramen. Then my wife and I saw Masaharu Fukuyama’s parents’ house and returned to the hotel.

This time we will eat lightly before we break up. I know my wish would not come true that I want to eat many meals. I’d be happy if I can eat “Hitokuchi Gyoza (fried small dumplings)”.

We moved to the second party. There is a sushi restaurant next to the building of the second party venue. It is a delicious sushi restaurant that is open until midnight. I thought it was impossible to go this time. We take the elevator and enter the lounge. We sat down and toasted together. Everyone was served steamed pork buns and salad bread. Bite-sized pork buns are popular with everyone, and we ate all while drinking.

Participants were from all over Nagasaki Prefecture. Some were unfamiliar with pork buns. Some people haven’t been to Nagasaki for 30 years. Nagasaki city is a region with a special history. Dejima of Nagasaki City is the port where Japan was allowed to interact with the Netherlands for 300 years when Japan was closed.

I think it’s hard to eat salad bread while drinking. I’m sure no one will eat bread. I planned to bring back the extra bread. However, when I noticed, the salad bread in front of me was only a bag.

It’s midnight if you notice. The second party was also over. It’s finally the last meal opportunity. I want to eat bite dumplings, no compromise. I go to eat alone. However, everyone wanted to eat bite dumplings, so a few people went to the restaurant. But it was already closed. This shop will close soon as the dumplings run out. The internet says it’s open until 1am, but it always closes at 23:00.

Next, the restaurant led by Nagasaki citizens was “Sanpachi Ramen”. We opened the door of a restaurant like a local Chinese restaurant. I smelled pork bones in my nose. We were shown to upstairs.

Beer and sake are the only alcohols we can order. There is no highball or shochu high. From the menu, I sensed the restaurant’s claim that “customers should eat fast and get out immediately.”

That’s all for our order. We have Oden, but we do not eat it. We can’t eat any more.

Dumplings came out us at first. I didn’t expect much, but it was very juicy and tasty. Everyone said it was delicious. That ship has sailed, if I wish I had taken a photo.

It is fried champon noodles. It’s not so greasy as I thought.

It’s a combination of rich soup and elastic Champon noodles. Large amount. It’s too much for me to taste it. I think it’s more correct to say that I’m fighting rather than eating. Another person is eating Champon with a very stern look. I’ve left most of the soup because it’s salty a little for me.

The volume is medium like Yakisoba. We shared and ate it. I can’t eat anymore. I only take pictures. It is exactly “eating with eyes.” Ah? Does it mean differently?

Finally, fried rice. I don’t want to see food anymore. It’s unnecessary. I don’t even feel like taking a picture. Anyway I want to go back to the hotel early because I will have a heartburn tomorrow morning.

The dinner party is over

When the fried rice was exhausted, we left the ramen shop. It seems everyone wanted to go home. Downtown is still bright. There were few people, but when I looked into the restaurants, there were some restaurants that were still lively. I heard Nagasaki City is suffering from depopulation, but it still feels vibrant. There is also an atmosphere unique to tourist spots. Will the corporate castle town transform to a tourist destination? Thinking vaguely, I returned to the hotel.